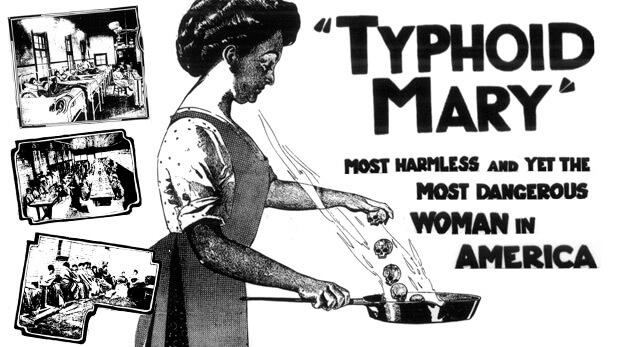 The story of Typhoid Mary is relevant to anyone in the food industry. Â Reports from the early 1900s indicate that a young servant cook working for affluent families in New York City, was the first person in the United States identified as an asymptomatic carrier of the pathogen associated with typhoid fever. Â Mary, seemingly healthy as could be, was linked to several outbreaks where people were infected with typhoid fever. Among the 51 infections Mary was presumed to have caused, at least three deaths were attributed to her. However, due to her use of aliases and refusal to cooperate, the exact number is not known. The bacteria associated with typhoid fever is known as Salmonella typhi.

Sick Food Handler and the Hazards it can cause:

There are many diseases that can be passed on by food handlers but the most common ones associated with food poisoning and food contamination. These include Salmonella, Staphylococcus, Hepatitis A and Noroviruses. To find out more about these read theÂ Bad Bug Book. Â This book is a must-read for anyone handling food.

Everyone should alsoÂ consider the transmission of illness between sick food handlers and other food handlers. It leaves your food business in a vulnerable position if all of your staff are off sick because another food handler spread their germs to their co-workers.